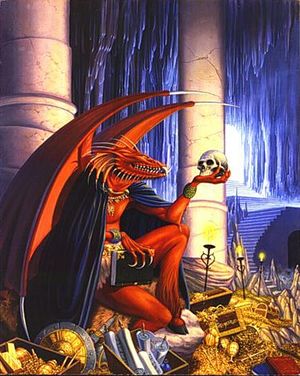 Most scholars agree that Zmeu's name and appearance is derived from the Slavic Zmey. However, the linguist Sorin Paliga challenges the notion that the Romanian word Zmeu is of Slavic origin, and hypothesizes that the pan-Slavic forms were an early Slavic loan from the Dacian language. Some English translations refer to this dragon as a species of ogre or giant because of his tendency to kidnap a maiden to be his wife in his otherworldly realm.

Often compared to other fantastic creatures, such as the Balaur or the Vârcolac, the Zmeu resembles the Slavic dragons, because it can fly and breathe fire. However, it usually display anthropomorphic traits: it is humanoid and has legs, arms, the ability to create and use artifacts such as weapons, or the desire to marry young girls.

In some stories, Zmeu appears in the sky and spits fire. In other stories, it has a magical precious stone on its head that shines like the sun and can shapeshift in the human or various animal forms.

Zmeu likes beautiful young girls, whom it kidnaps, usually on the purpose of marrying them. It is almost always defeated by a daring prince or knight-errant. Its natural form is that of a dragon.

The "zmeu" figures prominently in many Romanian folk tales as the manifestation of the destructive forces of greed and selfishness. Often, the zmeu steals something of great value, which only Fat-Frumos (the Romanian "Prince Charming"; literally: "handsome youth") can retrieve through his great, selfless bravery. For example, in the ballad of the knight Greuceanu, the zmeu steals the sun and the moon from the sky, thereby enshrouding all humanity in darkness. In the story of Prâslea the Brave and the Golden Apples, the zmeu robs the king of the precious "golden apples"; a parallel can be drawn to the German fairy tale The Golden Bird, the Russian Tsarevitch Ivan, the Fire Bird and the Gray Wolf, and the Bulgarian The Nine Peahens and the Golden Apples — although in all these other cases, the thief was a bird (nevertheless, in some versions of the Romanian story, the zmeu does transform into a bird to steal the golden apples). Usually, the zmeu resides in the "other world" (celalalt tarâm) and sometimes Fat-Frumos has to descend into his dark kingdom, implying that the zmeu lives underground.