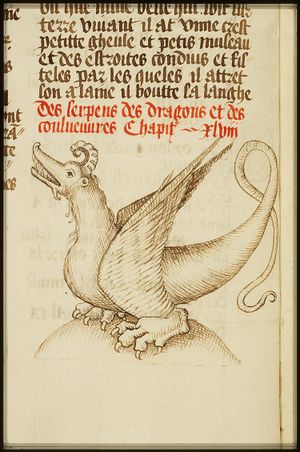 Wyvern found in a medieval bestiary

A wyvern (or wivern) is a legendary two-legged dragon often found in medieval heraldry.

The name "wyvern" derived from the Saxon word Wivere, which means "serpent". The French wyvern is known as the Vouivre or Wouive. Both words are etymologically related to viper.

The wyvern is regarded as a type of dragon although they are generally not characterized as breathing flame. Depictions often include two legs and two wings. Sometimes there are eagle's claws on the wingtips. The rest of its appearance can vary, such as appearing with a tail spade or with a serpent-like tail.

In the bestiaries of the Middle Ages, the wyvern was used as an allegory of Satan and was associated with war, pestilence and sin. In medieval alchemy, the wyvern was used to represent matter in its basest of state. The alchemist himself was depicted as the worthy knight overcoming the beast -- that is, transforming it into gold. 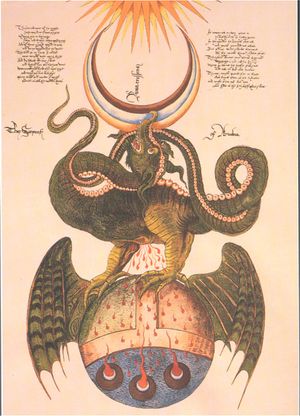 Wyverns have been depicted in heraldry on shields, coats of arms and banners for hundreds of years, and are a symbol of strength and endurance.

Stephen Friar speculates that the wyvern entered British heraldry as the standard of the Roman cohort and later appeared as the "burning dragon" of Cadwalladr (the origin of the red dragon of Wales).

The wyvern was the emblem of the rulers of Wessex and the word "Wyvern" is associated with the many areas of Wessex, reflected in many county and town heraldries of the South West and west of England. It also has been used farther afield in Herefordshire and Worcestershire, as the rivers Wye and Severn run through Hereford and Worcester respectively. Therefore, the wyvern is often used as a mascot in the west and south west of England. For example, one of the local radio stations is called Wyvern FM, and its first logo, in 1982, featured a wyvern dragon. 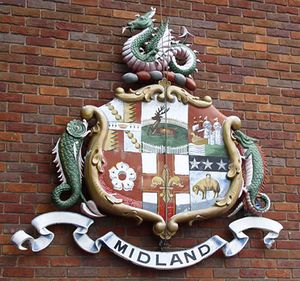 Some cryptozoologists have theorized that wyverns are evidence of surviving pterosaurs, a large flying reptile thought to have gone extinct around 65 million years ago. More probable is that the discovery of fossilized skeletons of long extinct species led people to reconstruct those creatures' appearances, and prehistoric and ancient peoples would not have had any reason to believe the creatures represented by the fossils were all dead.