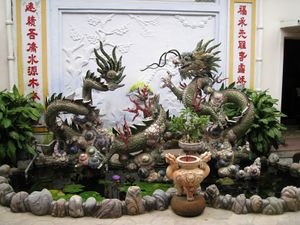 Fountain in a temple, Hoi Han

In Vietnam, the dragon (Vietnamese: rồng or long) is one the most important and sacred symbols. Similar to other Oriental dragons, it was strongly influenced by the Chinese dragon.

There are some kinds of dragons found on archaeological objects: crocodile-dragons (dragons with crocodile head and snake body). The cat-dragon excavated on a glazed terracotta piece in Bac Ninh has some features of Dai Viet period dragon: it does not have a crocodile head, its head is shorter and it has a long neck, its wing and backfin are long lines, and its whiskers and fur are found in the Dai Viet dragon image.

On the brick from this period found in Co Loa, the dragon is short, with a cat-like body and a fish's backfin.

The Ly dynasty is the dynasty which laid the foundation of Vietnamese feudal culture. Buddhism was widespread and Van Mieu, the first feudal university, was opened. The slender, flowing dragon of this period represents the King, and is literature dragon.

These dragons' perfectly rounded bodies curve lithely, in a long sinuous shape, tapering gradually to the tail. The body has 12 sections, symbolising 12 months in the year. On the dragon's back are small, uninterrupted, regular fins. The head, held high, is in proportion with the body, and has a long mane, beard, prominent eyes, crest on nose (pointing forwards), but no horns. The legs are small and thin, and usually 3-toed. The jaw is opened wide, with a long, thin tongue; the dragons always keep a châu (gem/jewel) in their mouths (a symbol of humanity, nobility and knowledge). These dragons are able to change the weather, and are responsible for crops.

The Tran dynasty dragon was similar to that of the Ly dynasty but looked more intrepid. The Tran dragon has new details: arms and horns. Its fiery crest is shorter. Its slightly curved body is fat and smaller toward the tail. There are many kinds of tail (straight and pointed tail, spiral tail) as well as many kinds of scale (a regular half-flower scale, slightly curved scale).

The Tran dragon symbolized the martial arts, because the Tran kings were descended from a Mandarin commander. The Vietnamese had to fight Mongol invaders in this age.

In this period, the Vietnamese dragon's image was influenced by the Chinese dragon, because of Confucianism's expansion policy. Differing from those of the previous dynasty, dragons in this age are not only represented in a curved posture among clouds but also in others. These dragons were majestic, with lion-heads. Instead of a fiery crest, they have a large nose. Their bodies only curve in two sections. Their feet have five sharp claws. 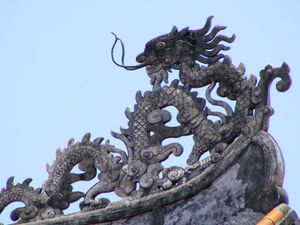 (1802–1883) During the early part of Nguyen dynasty, the dragon is represented with a spiral tail and long fiery sword-fin. Dragon was personified, for example, by a mother with her children, the couple of dragons. Its head and eyes are large. It has stag horns, a lion's nose, exposed canine teeth, regular flash scale, curved whiskers. Dragon images made for the King have 5 claws, others have 4 claws.

(1883–1945) In this later period the dragon image degenerated and became unrefined, losing its natural and majestic shape, and was seen as a signal of the decline in art of the last Vietnamese dynasty.

One of four dragons in front of Ngu Long Mon

Some proverbs and sayings mention dragons but imply something else:

Vietnamese place-names, and other things, named after dragons

Ha Noi (Vietnamese: Hà Nội), the capital of Vietnam, was anciently known as Thăng Long (from Thăng, meaning "to grow, to develop, to rise, to fly, or to ascend" and Long, meaning "dragon"), a name which is still used to refer to the capital for literary effect. In 1010, King Lý Thái Tổ moved the capital from Hoa Lư to Đại La for the reason written down in Chiếu dời đô (Royal proclamation of moving capital). He saw a Rồng vàng (yellow dragon) fly around on the clear blue sky, so he changed the name of Đại La to Thăng Long, meaning "Vietnam's bright and developed future".