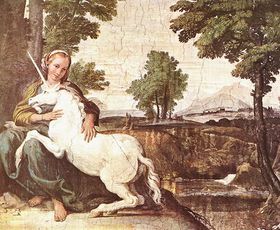 The gentle and pensive virgin has the power to tame the unicorn, in this fresco in Palazzo Farnese, Rome, probably by Domenichino, ca 1602

The Unicorn is a mythical creature. Strong, wild, and fierce, it was impossible to tame by man. Pliny, the Roman naturalist records it as "a very ferocious beast, similar in the rest of its body to a horse, with the head of a deer, the feet of an elephant, the tail of a boar, a deep, bellowing voice, and a single black horn, two cubits in length, standing out in the middle of its forehead." Aka : Re’em, Ki-lin, Kirin

It was traditionally believed that a virgin who was naked sitting beneath a tree could only catch the delicate unicorn. The unicorn, who craves purity, would be irresistibly drawn to the girl and lie down with his head in her lap. While it slept, the hunter could capture it. If, however, the girl was merely pretending to be a virgin, the unicorn would tear her apart.

Throughout the stories of the unicorn, its horn, the alicorn, is said to have great medicinal powers. In Ctesias’ writings, the dust filed from the horn was supposed to protect against deadly diseases if mixed into a potion. Or, if you drank from the horn, you would be protected against any poison.

Often, a narwhale tusk was sold as an alicorn, and it was often ground up and used for its magical properties.

Its white coloring made it a natural symbol for purity, chastity and virginity. The horn of the unicorn was the weapon of the faithful and of Christ.

The mythological unicorn was a symbol of chivalry with qualities befitting this status, proud and untamable.

The legend of the hunter and virgin bait became an allegory of the Incarnation of the Christ and was later forbidden by the Council of Trent because of the lack of real unicorns in the present world. 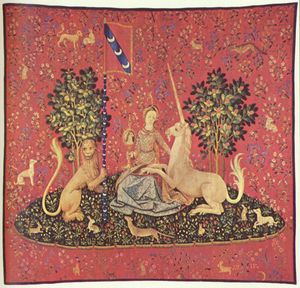 The famous late Gothic series of seven tapestry hangings, The Hunt of the Unicorn is a high point in European tapestry manufacture, combining both secular and religious themes. In the series, richly dressed noblemen, accompanied by huntsmen and hounds, pursue a unicorn against millefleurs backgrounds or settings of buildings and gardens. They bring the animal to bay with the help of a maiden who traps it with her charms, appear to kill it, and bring it back to a castle; in the last and most famous panel, The Unicorn in Captivity,; the unicorn is shown alive again and happy, chained to a pomegranate tree surrounded by a fence, in a field of flowers. Scholars conjecture that the red stains on its flanks are not blood but rather the juice from pomegranates, which were a symbol of fertility. However, the true meaning of the mysterious resurrected Unicorn in the last panel is unclear. The series was woven about 1500 in the Low Countries, probably Brussels or Liège, for an unknown patron. A set of six called the Dame á la licorne (Lady with the unicorn) at the Musée de Cluny, Paris, woven in the Southern Netherlands about the same time, pictures the five senses, the gateways to temptation, and finally Love ("A mon seul desir" the legend reads), with unicorns in each hanging.

In heraldry, a unicorn is depicted as a horse with a goat's cloven hooves and beard, a lion's tail, and a slender, spiral horn on its forehead. Whether because it was an emblem of the Incarnation or of the fearsome animal passions of raw nature, the unicorn was not widely used in early heraldry, but became popular from the fifteenth century. Though sometimes shown collared, which may perhaps be taken in some cases as an indication that it has been tamed or tempered, it is more usually shown collared with a broken chain attached, showing that it has broken free from its bondage and cannot be taken again.

Royal Arms of the United Kingdom

It is probably best known from the royal arms of Scotland and the United Kingdom: two unicorns support the Scottish arms; a lion and a unicorn support the UK arms. In the UK Royal arms, the lion is symbolic of the Sun, and the unicorn of the Moon. The arms of the Worshipful Society of Apothecaries in London has two golden unicorn supporters.

The unicorn is an archetypal monster, present both in eastern and western mythology. In the Bible, God is said to have the strength of a unicorn. [Num 23:22 & 24:8]; The warlike fierceness of the unicorn is referred to when Ephraim and Manasseh are described as being like the horns of unicorns. [Deu 33:17]; The terrifying destruction of Idumea is completed when God sends unicorns and wild bulls to attack the people. [Isa 34:8 see also Psa. 92:10 & Psa 22:21]

Modern zoologists have generally disbelieved the existence of the unicorn. Yet there are animals bearing on their heads a bony protuberance more or less like a horn, which may have given rise to the story. The rhinoceros horn, as it is called, is such a protuberance, though it does not exceed a few inches in height, and is far from agreeing with the descriptions of the horn of the unicorn. The nearest approach to a horn in the middle of the forehead is exhibited in the bony protuberance on the forehead of the giraffe; but this also is short and blunt, and is not the only horn of the animal, but a third horn, standing in front of the two others. Other believes that the narwhales, along with the Indian Rhinoceros (which only has one ‘horn’) are creatures that, through travelers’ exaggerations, became the fabled unicorn. The narwhale is a whale that has a single tusk protruding from its forehead. One can admire two carved narwhal horn in the Victoria and Albert Museum in London and in the National Museums and Galleries on Merseyside (NMGM); the two are thought to be a pair. The horn is 110 cm long with a diameter of 5.2 cm tapering to 2.5 cm.

The Oryx, a desert antilope, is also a potential candidate.

As far as modern fantasy literature for children is concerned, another mention of unicorns is in "Harry Potter and the Philosopher's Stone". The protagonist uses it to prolong his life by a drinking a very little amount of the unicorn’s silver blood.