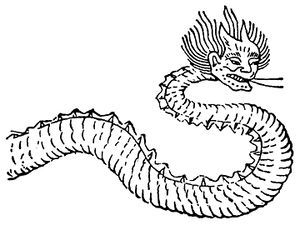 Zhuyin from the Shan Hai Jing

Zhuyin is supposed to have a human's face and snake's body, created day and night by opening and closing its eyes, and created seasonal winds by breathing.

"The Classic of Regions Beyond the Seas: The North" section describes Zhuyin 燭陰 on Mount Zhong 鍾山.

The deity of Mount Bell is named Torch Shade. When this deity's eyes look out there is daylight, and when he shuts his eyes there is night. When he blows it is winter, and when the calls out it is summer. He neither drinks, nor eats, nor breathes. If this god does breathe, there are gales. His body is a thousand leagues long. Torch Shade is east of the country of Nolegcalf. He has a human face and a snake's body, and he is scarlet in colour. The god lives on the lower slopes of Mount Bell. (tr. Birrell 2000:121)

'Enlightener' is a dragon; he enlightens the nine yin (darknesses, i.e. the nine points of the compass at the opposite, dark side of the earth, which is a flat disk; these nine points are North, South, East, West, North-east, North-west, South-east, South-west, and the Centre)". (tr. Visser 1913:62)

Beyond the northwest seas, north of the River Scarlet there is Mount Brillianttail. There is a god-human here with a human face and a snake's body, and he is scarlet. He has vertical eyes that are in a straight seam. When this deity closes his eyes, there is darkness. When the deity look with his eyes, there is light. He neither eats, nor sleeps, nor breathes. The wind and the rain are at his beck and call. This deity shines his torch over the ninefold darkness. This deity is Torch Dragon. (tr. Birrell 2000:188)

The yin in this jiuyin 九陰 "ninefold darkness" context explains using the "dragon" name Zhulong instead of "darkeness" name Zhuyin. Guo Pu quotes a legend from a no longer extant Shijing commentary (tr. Major 1993:204), "The sky is insufficient to cover the northwest, so there is no ebb and flow of yang and yin. Therefore a dragon carries a torch in its mouth to light up the sky."