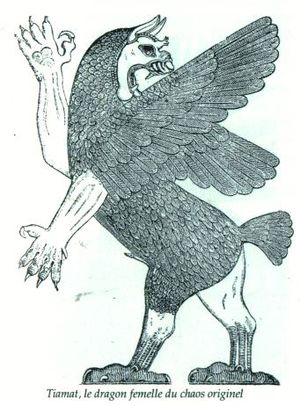 In Babylonian mythology, Tiamat is a sea goddess, and a monstrous embodiment of primordial chaos often represented as a dragon. With her consort Apsu, the 'sweet' water, Tiamat mothered the first generation of the gods.

Thorkild Jacobsen and Walter Burkert both argue for a connection with the Akkadian word for sea tâmtu, following an early form ti'amtum. Tiamat can also be derived from the Sumerian ti, "life", and ama, "mother". Burkert even attempts a linguistic connection to Tethys. The later form thalatth he finds to be clearly related to Greek thalassa, "sea". Tiamat has also been claimed to be also cognate with West Semitic tehwom ("the deeps, abyss"), in the Book of Genesis 1.

Though Tiamat is often described by modern authors as a sea serpent or dragon, no ancient texts exist in which there is a clear association with those kinds of creatures. However, the Enûma Elish specifically states that Tiamat did give birth to dragons and serpents.

Within the Enûma Elish her physical description includes a tail, a thigh, "lower parts" (which shake together), a belly, an udder, ribs, a neck, a head, a skull, eyes, nostrils, a mouth, and lips. She has insides, a heart, arteries, and blood.

The strictly modern depiction of Tiamat as a multi-headed dragon was popularized in the 1970s as a fixture of the Dungeons & Dragons role playing game thanks to earlier sources associating Tiamat with later mythological characters, such as Lotan. 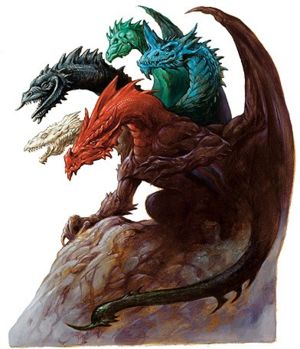 According to Enûma Elish, the Babylonian epic of creation (dated at around 1700 BCE, but aspects of the story could go back to about 2000 BCE). At the beginning, the heavens did not yet exist nor the earth below, there was nothing but two elements - Apsu, "the first, the begetter", the male spirit of the fresh water and the abyss, and Tiamat, "she who bore them all", the female dragon spirit of salt water and chaos. She and Apsu filled the cosmic abyss with the primeval waters; they were "mixing their waters". The two had an uncountable number of children (including Lachmu and Lachamu), giant sea serpents, storm demons, fish-men, scorpion-men and many others that became gods and goddesses.

Upon looking at their numbers and boisterous ways, Apsu decided to kill them all. This angered Kingu, their son and new consort, who reported the event to Tiamat. She gave him the Tablets of Destiny and with the help of an army of twelve monsters (the viper, the shark, the scorpion man, the storm demon, the great lion, 11 dragons, the mad dog and four nameless ones), Tiamat stood up against Apsu and her children.

The Gods gathered in terror, but Anu, (replaced later, first by Enlil and, in the late version that has survived after the First Dynasty of Babylon, by Marduk, the son of Ea), first extracting a promise that he would be revered as "king of the gods", overcame her, armed with the arrows of the winds, a net, a club, and an invincible spear. He wove a net of the four winds, caught her, and as she opened her mouth to eat him, he drove an evil wind down her throat so she could not close her mouth.

And the lord stood upon Tiamat's hinder parts,
And with his merciless club he smashed her skull.
He cut through the channels of her blood,
And he made the North wind bear it away into secret places.

Slicing Tiamat in half, he made from her ribs the vault of heaven and earth. Her weeping eyes became the source of the Tigris and the Euphrates. With the approval of the elder gods, he took from Kingu the Tablets of Destiny, installing himself as the head of the Babylonian pantheon. Kingu was captured and was later slain: his red blood mixed with the red clay of the Earth would make the body of humankind, created to act as the servant of the younger Igigi Gods.

It is thought that female deities are older than male ones in Mesopotamia, and Tiamat may have begun as part of the cult of Nammu, a female principle of a watery creative force. The story is a classic example of a male deity slaying a female dragon or serpent-like monster in an attempt to replace a cooperative, "chaotic" natural order with a hierarchical, paternal, and often monotheistic system.