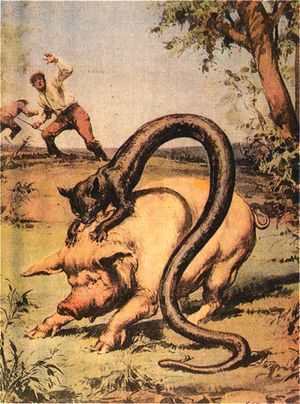 The tatzelwurm is a dragon-like beast and cryptid reported from the Alps mountains areas covering part of Austria, Bavaria and Switzerland.

It is known by several names in different regions.

The tatzelwurm has a snake-like body between 2 and 6 feet in length, with two clawed front legs, but no hind legs. It has smooth hairless skin covered with delicate scales. Its most distinctive trait is a large head with big eyes similar to the head of a cat, except for it having scales instead of fur. The tatzelwurm can grow to at least six feet long, but some specimens, possibly juveniles, are considerably smaller. Local folklore holds that the Tatzelwurm is able to defend itself by expelling poisonous fumes that are capable of killing a human

One claimed photograph of the Tatzelwurm exists. It was taken in 1934 by Swiss photographer named Balkin who took a photo of what he thought was a very peculiar log. When the camera flashed, the "log" darted away.

The creature’s existence was excepted as fact in the Alps and it appeared in several books on Alpine natural history and hunting along side more familiar animals. Swiss naturalist Friedrich von Tschundi was convinced of the reality of the creature and wrote in 1861…

“In Bernese Oberland and the Jura the belief is widespread that there exists a sort of “cave worm” which is thick, 30 to 90 cm long and has two short legs ; it appears at the approach of storms after a long dry spell…

“In 1828 a peasant in the Solothurn canton found one in a dried-up marsh and put it aside intending to take it to professor Hugi. But in the meantime the crows ate half of it. The skeleton was taken to the town of Solothurn, were they could not decide what it was and sent it to Heidelburg-where all trace of it was lost”

In the 1930s Dr Gerhard Venzmer and Hans Fulcher collected the evidence of 60 witnesses. All agreed it was 30 to 60 cm (1 to 2 feet) long, cylindrical in shape with the tail ending abruptly. It had a large blunt head that grew directly into the body with no narrowing in the neck area. The eyes were large and the body scaled. It hissed like a snake.

There have been sightings further south in Europe as well. Similar creatures have been reported from France, Italy and Sicily. There has even been a report of what sounds very like a Tatzelwurm from Denmark in June 1973! Although most authorities have treated the Tatzelwurm as a mystery reptile others disagree. An Austrian schoolmaster who came across one in 1929 whilst exploring a cave on the Tempelmauer believed it to be a giant salamander.

“I started to look for the entrance to the cave. Suddenly I saw a snake like animal sprawled on the rotting foliage that covered the ground.. Its skin was almost white, not covered by scales but smooth. The head was flat and two very short feet on the fore part of the body were visible (….. ) “My” Tatzelwurm did not have large claws but short and atrophied looking feet; his length did not exceed 40 or 45 centimetres. Most probably the Tatzelwurm is a rare variety of salamander living in moist caves and only rarely coming to the light of day.”

Over the last ten years, the people of Tresivio, in the Valtelina Valley, a region of Italy on the Swiss border, made repeated sightings of an unusual creature, described as an “agile bipedal lizard, about a metre tall and nearly two metres long.” The first sighting, the papers reported in the summer of 2009, “was regarded as an isolated incident”, and had been made “a few years ago”. A young student of agricultural sciences spotted the animal, but at that time nobody believed her. Now an assistant researcher, she stands by her report. “I was not dreaming! I saw it clearly with my own eyes. It approached me, walking on its hind legs. The anterior legs were very small. It resembled a prehistoric veloci­raptor, and generally it was like a monitor lizard. Yet while monitors move on four legs, this one went upright. Its back was nearly 80cm above the ground, with the head nearly a metre. I guess it was one and a half or two metres long.” (Il Giorno, 7 Aug 2009).

These memories were published because the monster reappeared in July 2009, observed on several occasions by local witnesses from Tresivio and Ponte. “It is not an iguana, it is less massive, and we saw it running,” they told a local paper, which noted that “Many people now no longer doubt it. With the summer and the warmth the strange reptile comes out of its hiding place…” A fruit farmer from Ponte had seen it, in July: “I had parked my tractor above the village on the road into the Val Fontana. It looked like a lizard with a long tail. It resembled a kangaroo… but it had scales, therefore it must have been a reptile.”

In October 2009, an anonymous witness called the local newspaper to report that he had encountered a very curious reptile on the banks of the Longhella river between Marostica and Vallonara. He had seen it on two occasions, on 4 and 5 October. He thought it was a monitor lizard, an iguana, or possibly a caiman – but he was certain it was a reptile about a metre long. It had previously been noted that ducks had disappeared in the river, and there had been talk of a giant carp which some claimed to have seen. Giornale di Vicenza, 6 Oct 2009.

Reports of these creatures have become very rare, so cryptozoologists think that, if the tatzelwurm did exist in the first place, it may be extinct today. Speculations on what it might have been center on lizards, salamanders, snakes and otters.

The little girl of a farmer’s familiy from the ‘Oberhof’ (lit. upper farm, very common name for farms in Switzerland ) was ordered to cut bean poles in the mountain forest of ‘Saal’. So she was busy with the stem of a young fir, which stood on three evenly protruding roots like a stool, forming a hollow underneath. After the first cut of the axe, a young ‘Stollenwurm’ (Tunnel worm = Tatzelwurm) emerged from underneath and attacked the child. It was grey in colour, not quite as long as an arm, the mid-body about the thickness of a cat, had two upright, round-cut ears, fleshy and hairless, and walked on two short front-legs with small wide paws. Thus was the whole appearance cute, only at the front of the head sat two strangely huge eyes, as big as little wheels and as bright as stars. This extremely bright glance made the child flee immediately. The narrator, which experienced this in her childhood, is now a seventy-year old widow. She not only still insists on the unmistaken veracity of the experience, but adds that the appearance of this ‘Stollenwurm’ coincided with an exceptionally hot summer. (Source: Tales from the Fricktal", Frick, 1987/88 )

In the summer of 1717, the herb collector and root-digger Joseph Scherer from ‘Näfels’ was busy at the foot of the ‘Glärnisch Hirschenzungen’ (mountain), whilst his boy was picking all sorts of flowers. Suddenly the boy gave a loud shriek. “What’s the matter”, the father called over. But the boy gave no reply, only stared with a pale face and horror-filled eyes at a big rock. The father found that strange. He left his bundle of herbs and hurried over. What did he see? From beneath a block of rock hissed a gruesome animal, from whose cat-like head two wild, protruding eyes were sparkling.

As soon as he tried to shoo the cat-beast away, it stirred and the whole body became visible. Four short legs armed with claws carried a spotted body, which was covered all over with scales and was about as thick as a half-filled pitcher. The animal whipped the long tail excitedly side to side, and surely it would have jumped at the two people, if the herb-gatherer wouldn’t have quickly sharpened a stick and pierced the animal with it. To Scherer’s amazement, the stick penetrated the flesh very easily, as if he pierced a slab of butter. But poisonous, stinking blood shot out of the wound. A few drops splashed onto the botanist’s leg, which immediately swell up massively, so that Scherer could only limp home with great difficuly. Over a month he had to ‘salve and doctor’ until the swelling finally vanished. Everybody was convinced that the herbalist had killed a dragon. Although it was only about two foot long- and consequently must have been only a very young one. Who knows what father & son would have experienced if they would have come upon a full-grown ‘Lindwurm’? (Source: Glarner tales", collected & publ. by Kaspar Freuler und Hans Thürer, 1968).