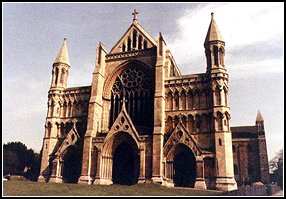 St Albans has a multitude of ghosts and strange stories, many of which are attached to the magnificent abbey. St Albans has been occupied from very early in its history, the Roman town of Verulamium once stood in the valley, in the area where the public park now lies. It was ravaged by Boudica and her army in AD60, and burned to the ground, but soon rebuilt to become one of the major Southern Roman towns.

St Alban's AbbeySt Alban's AbbeySt Alban, who gives the town and the abbey its name, was Britain's first Christian martyr in 304AD, a time when most Romans were still Pagan. St Alban was beheaded for his Christian beliefs on the hill where the Abbey now stands. According to legend a stream stopped flowing and began to flow again when his head rolled to the floor, in other accounts the stream began to flow at his feet when he begged for water.

The abbey has been the scene for many ghostly sightings over the years, and ghostly choral accompaniment has also been heard on several occasions. A well documented case came to light in 1982 in the local newspaper, the Evening Post-Echo, it describes how a fire watcher in 1944 called Basil Saville, witnessed two hooded figures, saw the organ play of its own accord, heard ghostly music, and saw a procession of ghostly monks. The music has been heard on many occasions and has been identified as a piece by Robert Fairfax who died in 1521. The music has only recently been rediscovered and linked with that heard by witnesses. 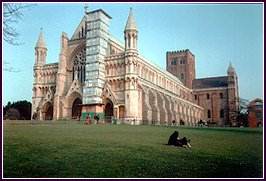 St Alban is also said to make an appearance, during a visit to the abbey grounds one woman experienced a vision of a white figure with a golden radiance about its head. This has been identified with St Alban, who was buried in a secret place outside the abbey. Other apparitions include ghostly monks who disappear through walls, and a phantom coach and horses on Holywell Hill.

St Albans was the scene of two particularly bloody battles fought in its streets during the Wars of the Roses. In the years after the two battles one house was said to ring with the clash of steel on the anniversary of the battle. The Abbey Green is also said to be haunted, it is the location where Henry the VI forces were defeated in 1455.

This is the scene of one of Britain’s oldest dragon legends. Abbot Ealdred of St Albans, who succeeded office in 1007, rebuilt his abbey using the ruins of Verulamium, a Roman city nearby. During the course of the demolitions he was said to have flattened the lair of the dragon of Wormenhert. There is no information on the dragon itself, or on what it was doing whilst the Abbot destroyed its den. (From an article by Richard Freeman)

Directions: St Albans can be reached from the A1057 and the A5183. The Abbey is near the centre of the town off Holy Well Hill Road from London Road or Chequer Street.