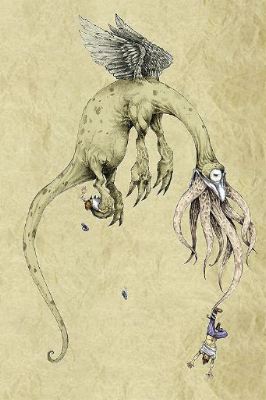 The snallygaster is a mythical dragon-like beast said to inhabit the Blue Ridge Mountains near Braddock Heights, Maryland.

Snallygaster is from the German, Schneller Geist meaning "quick spirit".

The Snallygaster was described as half-reptile, half-bird with a metallic beak lined with razor-sharp teeth, occasionally with octopus-like tentacles.

The Snallygaster swoops silently from the sky to pick up and carry off its victims. The earliest stories claim that this monster sucked the blood of its victims. Seven-pointed stars, which reputedly kept the snallygaster at bay, can still be seen painted on local barns.

The Blue Ridge Mountains area was settled by German immigrants beginning in the 1730s. Early accounts describe the community being terrorized by a monster called a Schneller Geist, meaning "quick spirit" in German.

It has been suggested the legend was resurrected in the 19th century to frighten freed slaves.

In February and March 1909, newspaper accounts describe encounters between local residents and a beast with "enormous wings, a long pointed bill, claws like steel hooks, and an eye in the center of its forehead." It was described as making screeches "like a locomotive whistle." A great deal of publicity surrounded this string of appearances, with the Smithsonian Institution offering a reward for the hide. U.S. President Theodore Roosevelt reportedly considered postponing an African safari to personally hunt the beast.