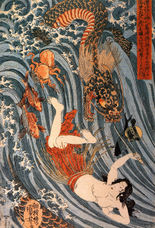 Tamatori being pursued by a dragon

Ryūjin is a sea dragon with a large mouth and a long greenish body.

Ryūjin is able to transform into a human shape. He lived in Ryūgū-jō, his palace under the sea built out of red and white coral, from where he controlled the tides with magical tide jewels. Sea turtles, fish and jellyfish are often depicted as Ryūjin's servants.

Ryūjin was the father of the beautiful goddess Otohime who married the hunter prince Hoori. The first Emperor of Japan, Emperor Jimmu, is said to have been a grandson of Otohime and Hoori's. Thus, Ryūjin is one of the ancestors of the Japanese imperial dynasty.

According to legend, the Empress Jingū was able to carry out her attack into Korea with the help of Ryūjin's tide jewels. Upon confronting the Korean navy, Jingū threw the low tide jewel into the sea, and the tide receded. The Korean fleet was stranded, and the men got out of their ships. Jingū then threw down the high tide jewel and the water rose, drowning the Korean soldiers. An annual festival, called Gion Matsuri, at the Yasaka Shrine celebrates this legend.

Another legend involving Ryūjin is the story about how the jellyfish lost its bones. According to this story, Ryūjin wanted to eat monkey's liver (in some versions of the story, to heal an incurable rash), and sent the jellyfish to get him a monkey. The monkey managed to sneak away from the jellyfish by telling him that he had put his liver in a jar in the forest and offered to go and get it. As the jellyfish came back and told Ryūjin what had happened, Ryūjin became so angry that he beat the jellyfish until its bones were crushed.

Ryūjin shinkō 竜神信仰 "dragon god faith" is a form of Shinto religious belief that worships dragons as water kami. It is connected with agricultural rituals, rain prayers, and the success of fisherman.