Here is set the famous story of the Lambton Worm. One day the heir of the Lambton family, John Lambton, was fishing in the River Wear but had not caught anything all day. Finally his line was taken by something very strong but after a struggle the young heir was disppointed to find his catch was only a weird looking worm. In a fit of anger he cast the worm down a nearby well. Time passed and John went abroad to help in the defence of Rhodes against the Turks. Meanwhile the worm grew in the well, known to this day as Worm Well, until one day it got out and returned to the river. It coiled itself around a rock during the day and a small hill near North Biddick, later called Worm Hill, at night. It ravaged the land to the north of the river, and after all the livestock had been eaten ventured south into the Lambton estate. In order to pacify the beast the Lord had a trough filled with the milk from nine cows each day which the worm drank. However if the worm did not judge the milk to be enough it would lay waste to the land around. Although many knights did try to kill the worm, none succeeded because the creature was able to rejoin itself when cut in two. 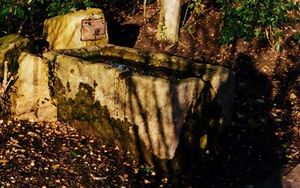 Eventually John Lambton returned from the wars and discovered the ruins of the once prosperous estate. After discovering the reason, he determined to slay the monster. A local village wise woman advised him that he should have a suit of armour fashioned with many blades set into it, then he was to go to the rock whilst the worm was out foraging and swear that if he managed to kill the worm that he would also kill the first living thing he saw afterwards.

After the preparations were made, John went to the rock in his armour and swore the oath. Before he did so though, he told his father that he would sound his horn on his arrival back and that his father should loose his favourite hound. With this done, the hero awaited the worm. When it arrived it threw its coils around John Lambton but was wounded by the armour. Then John cut the worm into pieces with his sword and the river carried the pieces away before they could reform.

Triumphantly, John blew his horn and set off for home, but his father forgot to loose the hound and was the first to greet him on his return. Now John could not kill his father so the oath was broken and as a result, for the next nine generations no Lord of Lambton would die in his bed.