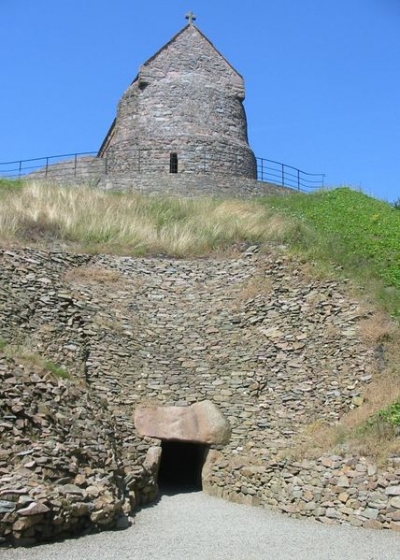 La Hougue Bie is a major Neolitic ritual site dating back to 3500BC and one of the best preserved cruciform passage graves in Europe.

Its passage is twenty meters long and is covered by a 12.2 meter high earth mound.

The mound itself is 58 meters in diameter and covers an area of 2400 square meters.

First opened for excavation on 3rd September 1924 by the Société Jersiaise, they found the site had been robbed at an earlier date.

They discovered the remains of eight bodies and various pieces of pottery.

La Hougue Bie would have been far more than a place to bury tribal members and was possibly used as place of worship.

The passage is aligned with the sunrise on the spring and autumn equinox.

Atop the mound sits a chapel dating back to medieval times. At one point this building was said to have been part of a castle on this location.

It was used as a lookout post during World War II and a bunker was built within the mound itself.

Jersey was terrorised by a fearful dragon that made it’s nest in the marshes around St Saviour.

Word of this beast reached the Seigneur de Hambye in Normandy, who came to Jersey to kill the creature.

The fight was long and hard but the Seigneur de Hambye managed to slay the dragon in single combat.

Tired and wounded he lay down after the fight to recover.

Whilst in this exhausted state, his squire murdered him and dumped the body in a marsh, intent on returning home and claiming the victory for own.

On his return to his dead master’s estate he described how the dragon had killed the Seigneur de Hambye and in return he had revenged his master by slaughtering the beast.

He let it be known that his master’s final wish was that his loyal squire should marry his widow.

This gave the murderer fame and control over his dead master’s estates.

Then one night he admitted his guilt whilst asleep next to his new wife.

She immediately had him arrested and brought to trial. He admitted his guilt and was executed.

The widow of the Seigneur then travelled to Jersey and raised a monument to her dead husband, this being La Hougue Bie.