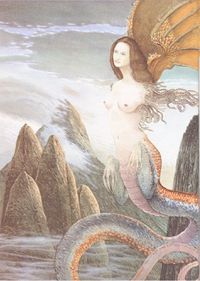 Echidna was called the "Mother of All Monsters" and described by Hesiod as a female monster spawned in a cave, who mothered with her mate Typhon every major monster in the Greek mythos.

She was depicted with the face and torso of a beautiful woman, sometimes wings in archaic vase-paintings, and always with the body of a serpent (see also Lamia). She is also sometimes described as having two serpent's tails. Karl Kerenyi noted an archaic vase-painting with a pair of echidnas performing sacred rites in a vineyard, while on the opposite side of the vessel, goats were attacking the vines (Kerenyi 1951, p 51f). Echidna as protector of the vineyard perhaps.

the goddess fierce Echidna who is half a nymph with glancing eyes and fair cheeks, and half again a huge snake, great and awful, with speckled skin, eating raw flesh beneath the secret parts of the holy earth. And there she has a cave deep down under a hollow rock far from the deathless gods and mortal men. There, then, did the gods appoint her a glorious house to dwell in: and she keeps guard in Arima beneath the earth, grim Echidna, a nymph who dies not nor grows old all her days. (Theogony, 295-305)

Usually considered offspring of Tartarus and Gaia, or of Ceto and Phorcys (according to Hesiod) or of Chrysaor and the naiad Callirhoe, or Peiras and Styx (according to Pausanias, who did not know who Peiras was aside from her father)

The offspring of Typhon and Echidna were:

Some sources also include the Gorgons and the Graeae as her children.

According to Herodotus (III.108), Hercules had three children by her: 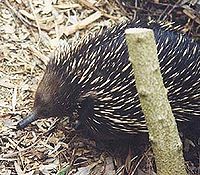 The site of her cave, Arima, Homer calls "the couch of Typhoeus (Iliad, II.783). When she and her mate attacked the Olympians, Zeus beat them back and punished Typhon by sealing him under Mount Etna. However, Zeus allowed Echidna and her children to live as a challenge to future heroes. She was an immortal and ageless nymph to Hesiod (Theogony above), but was killed where she slept by Argus Panopes, the hundred-eyed giant.

In the television show Supernatural, the evil villian is called "The Mother of All Monsters."