ragons are mythical (?) creatures that appear in many different cultures and time periods. Dragons have been described as monsters, serpents, reptiles, or beasts.

The dragon is the great, great grandfather of all monsters.

The dragon's image has crawled across cave paintings 25,000 years old, dwarfing mammoths. It has slithered across Chinese rock art in Shanxi province 8000 years before Christ.

There is something magical about dragons that has kept our intrigue over many centuries.

Few creatures of folklore and mythology conjure up the mental images of the dragon. Also known as wurm, wyrm and firedrake, these mercurial creatures pervade almost every pantheon of classical mythology and have become an integral inclusion of an entire genre of fantasy literature.

Dragons are usually thought to have wings and breathe fire. They also are said to have scales and claws. Some also have horns. Almost always they are said to be venomous. Some dragons may have two or more heads. They may also have more than one tail. They may have two, four or even more legs; however, most are known to have four legs. Dragons are said to eat things such as rats, birds, snakes, bats, or even humans, especially children.

Dragons are very intelligent creatures. They live in remote areas, far away from humans, in places that are dark, damp and secluded, such as caves. Dragons were first thought of as creatures who lived in water. Later they became associated with fire. Sea serpents may have been the first dragons, and may be the reason for this association.

Almost all dragon stories portray the dragon as the villain from whom the hero must protect the city or the princess. But some dragons can take on the form of the protector. The biggest differences in dragons usually come from different cultures, especially the cultures of the East and the West. Each culture seems to have their own idea about dragons.

Dragons cannot be put all into one group, as there are so many dragons. Each culture seems to have their own type of dragon, and each of these dragons is usually very different. Some people have said that dragons once existed, maybe during the time of the dinosaurs. Others believe that dragons began around the same time the earth began. A few people even claim to have seen a dragon in their life time.

But most of all, dragons are fascinating, magical creatures who have captivated our attention for thousands of years. The many different kinds of dragons and the ability for us to use our imagination to create these creatures only adds to their appeal. Many stories have been told about these great beings and it seems like dragons are a part of our mythical history. Whether these creatures are or ever were real probably doesn't matter due to the fact that the imagination can create them in almost any situation.

Dragons have often been used in art work. Pictures or sculptures of dragons seem mysterious and magical. Fashion has found style in these magical creatures, especially in the Eastern dragons. 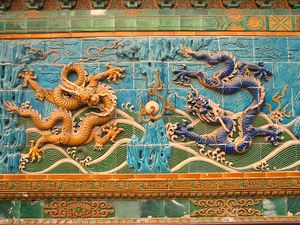